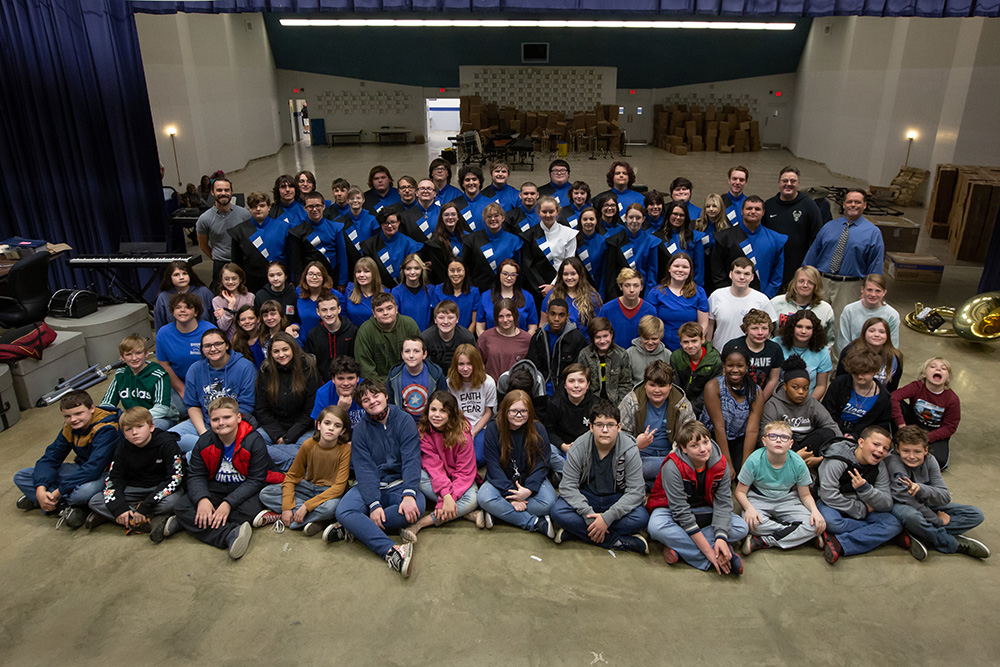 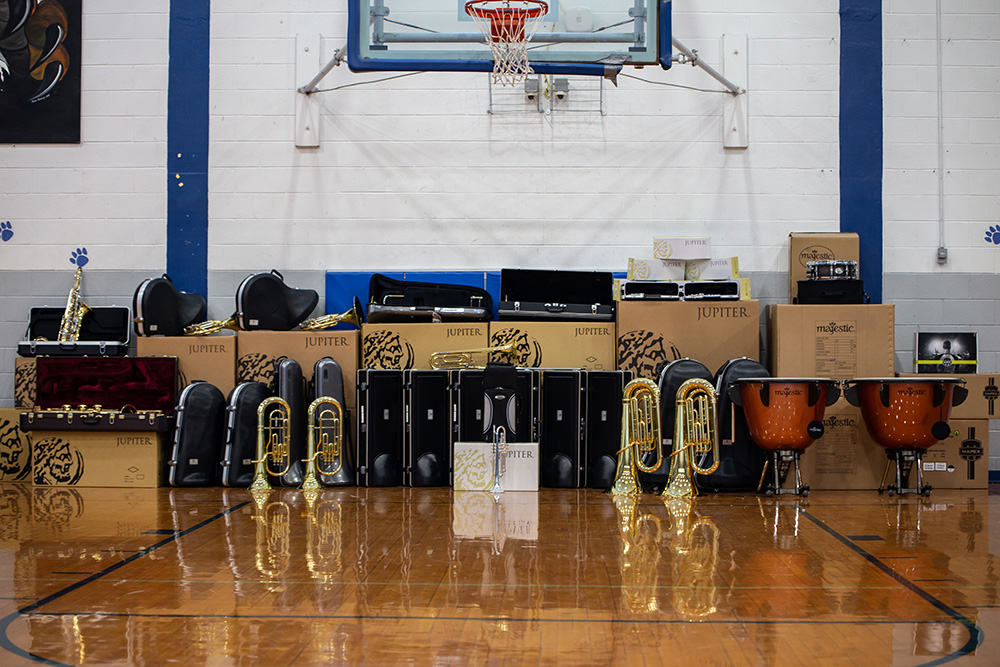 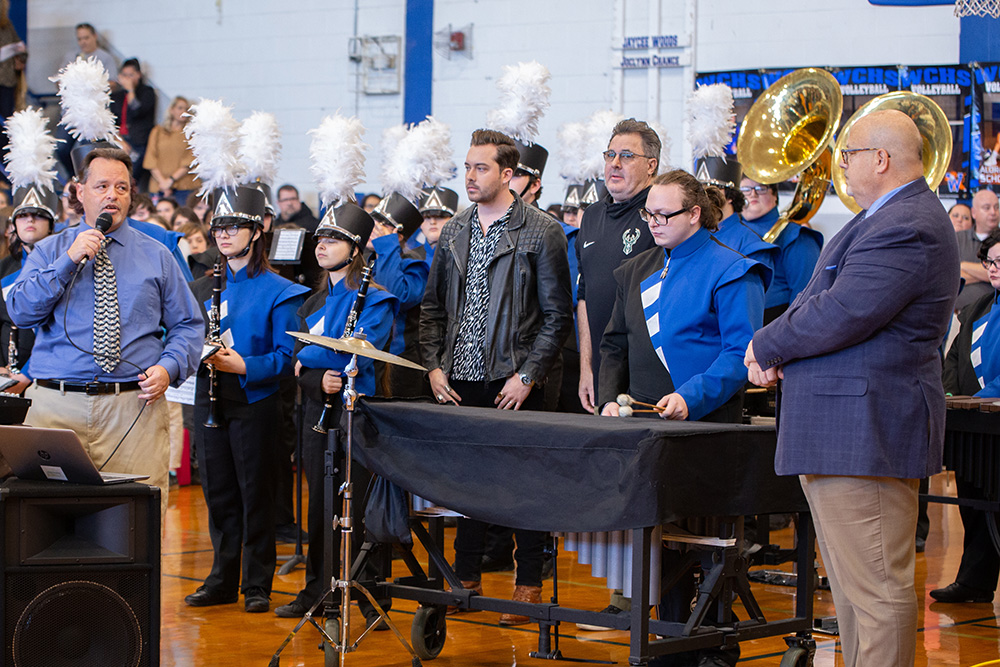 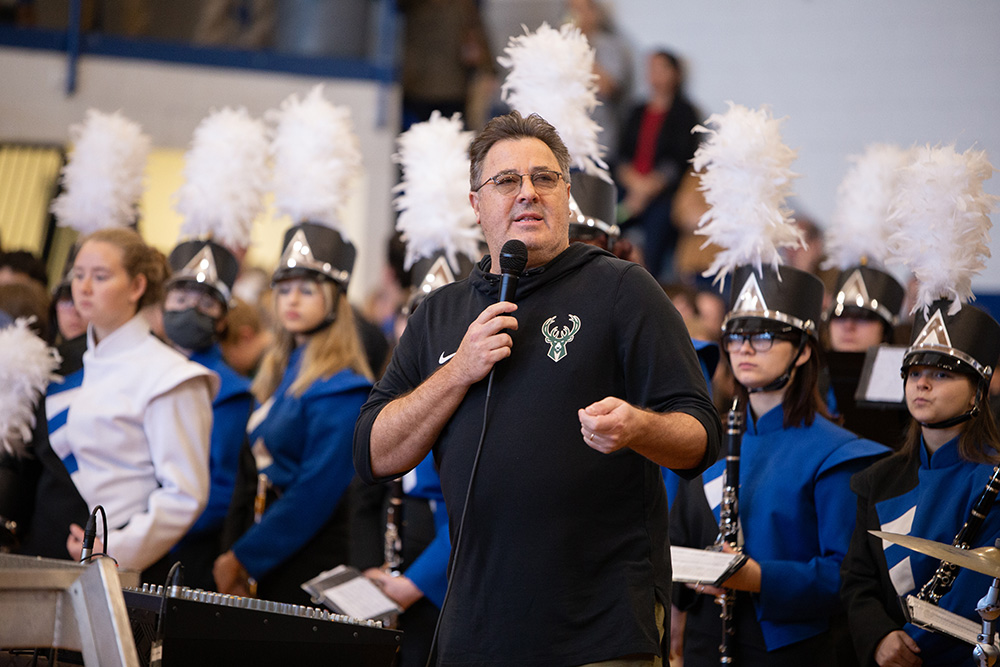 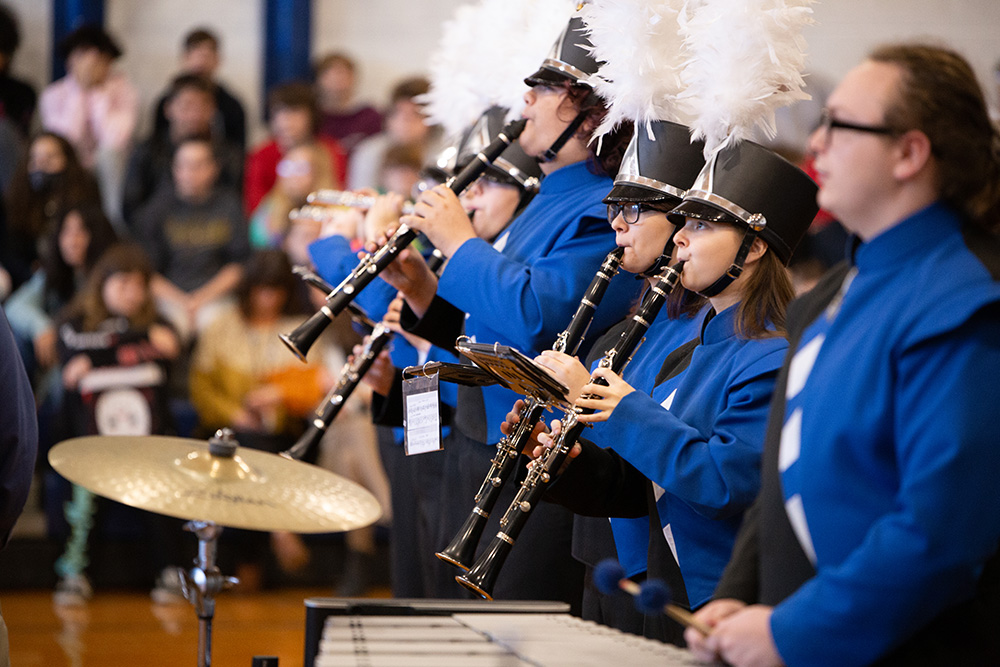 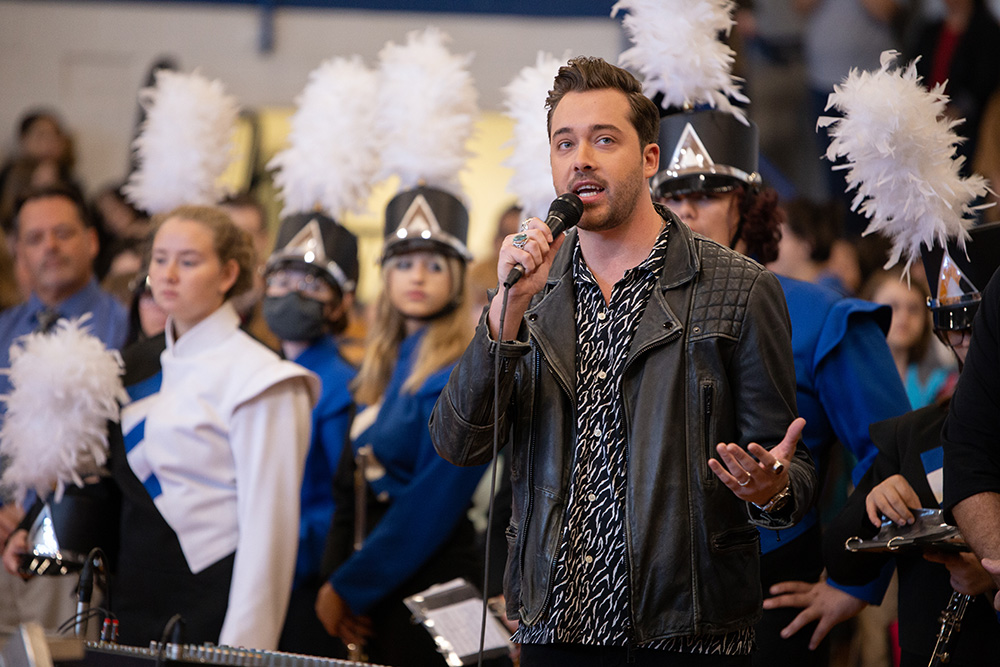 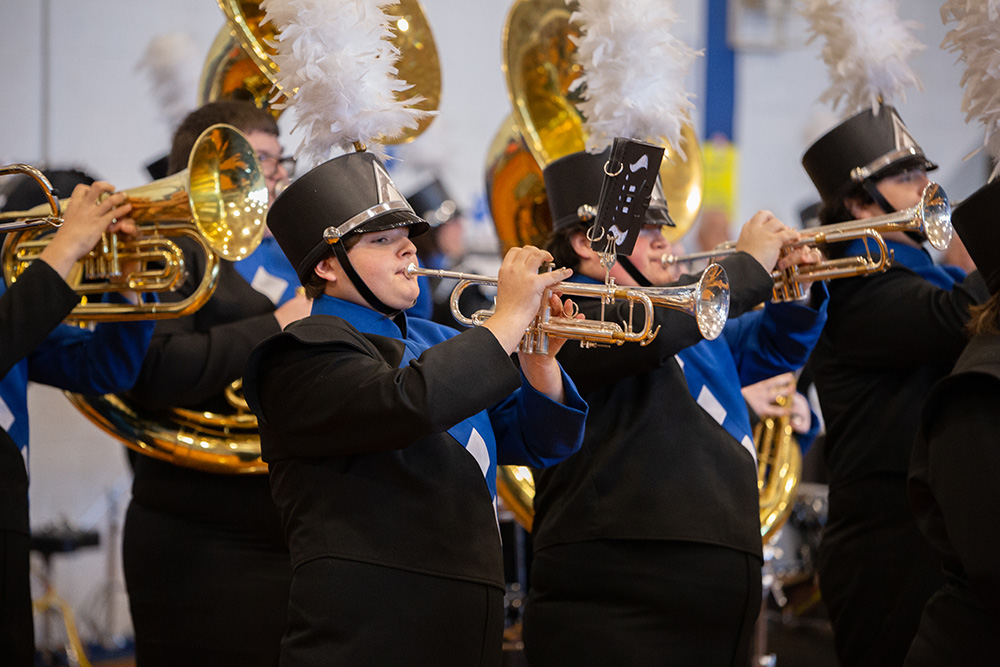 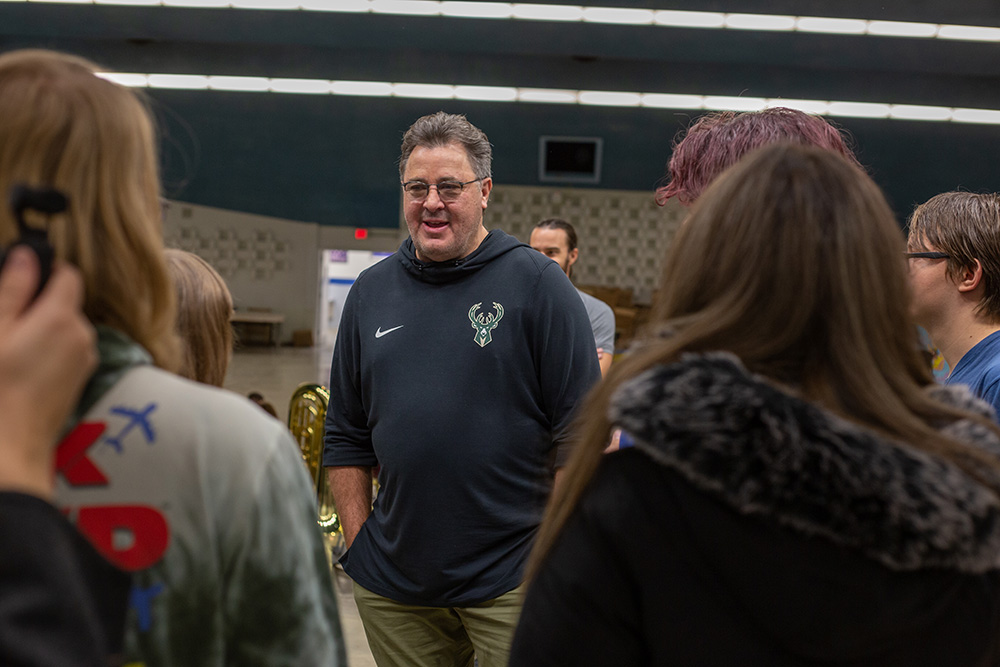 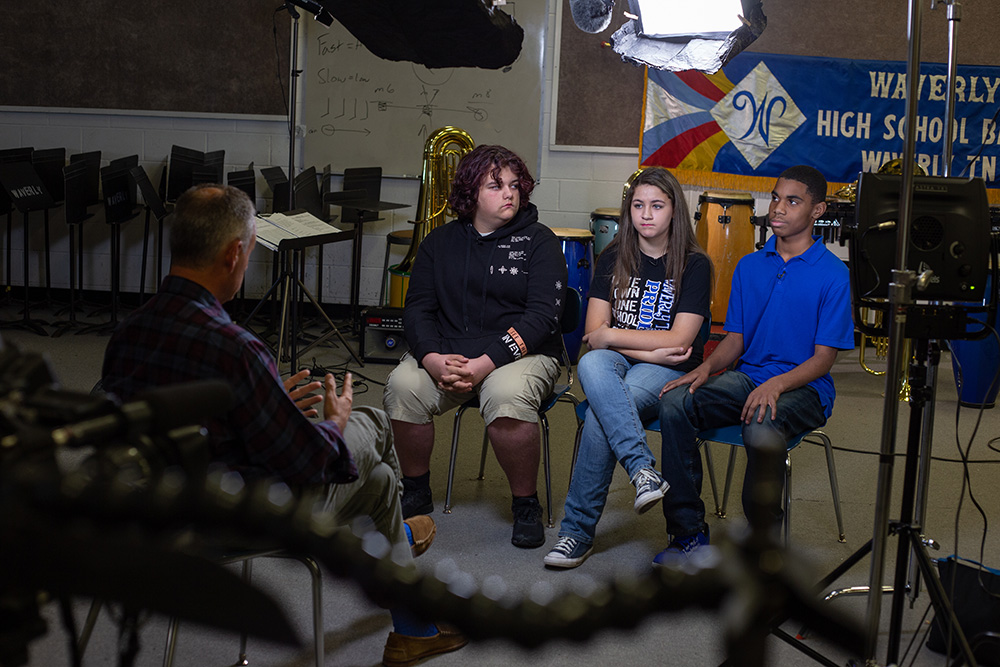 As Gill and Hall surprised a Monday morning student assembly with the news, KHS America revealed a donation of $100,000 worth of musical instruments to completely replace and upgrade everything that the Waverly high school and junior high school bands lost in the recent flood.

“I’m a small town minded guy. I know what it feels like. This is a place where everybody knows everybody,” Gill shared with “CBS Mornings” host Mark Strassmann, who was on hand in Waverly to document the event. “I often feel like we should be like this all the time. That’s my dream. Let’s not just be kind when somebody’s struggling; let’s just be kind.” Watch the full segment HERE.

“Most people were smiling; I could see the glowing intentions in their eyes,” added seventh grade clarinetist Harmony Sanders, whose family lost her home in the flood. “I think everybody can just be happier now and have less weight on their shoulders.”

KHS America, which was connected with band director Joseph Bullington as well as Gill and Hall via the CMA Foundation, donated over 40 instruments from their brands: Jupiter wind instruments, Majestic concert percussion (including concert toms, a concert bass drum and a concert snare drum, as well as a marimba and a xylophone), three XO Brass professional trombones and a Mapex drum set. Percussion tables and a bell stand from Hercules were also included.

“KHS was founded on the principles of changing lives through music and the knowledge that music and music education are essential to society,” noted Jerry Goldenson, President of KHS America. “Supporting this incredible music program and being a part of this relief effort is something very special that will surely have a positive impact on the lives of young people and the community of Waverly as a whole. It’s an honor to be able to provide even a small bit of assistance.”

The donation offered a moment of hope for a community still rebuilding from the tragedy that struck on August 21, with many residents still displaced from their homes. To contribute to ongoing recovery efforts via the United Way of Humphreys County, text 44321 to TNFLOODRELIEF.

About KHS America
KHS America is dedicated to the enrichment of lives through music performance and education by providing high-quality musical instruments and services designed to support musicians, educators and retail partners. A primary core value of KHS America is the belief that music is an essential part of life for every individual and that it provides a positive contribution to society as a whole.

About Vince Gill
One of the most popular artists in modern country music, Vince Gill is famous for his top-notch songwriting, world-class guitar playing and warm, soaring tenor, all wrapped up in a quick and easy wit. Gill achieved his big breakthrough in 1990 with “When I Call Your Name,” which won both the Country Music Association’s Single and Song of the Year awards as well as a GRAMMY. Gill has won 18 CMA Awards, including Song of the Year four times – making him the most-awarded artist in that category in CMA history. Since

1990, Gill has won 22 GRAMMY Awards. A wide-ranging songwriter, his compositions earned him entry into the Nashville Songwriters Hall of Fame in 2005. The Academy of Country Music has conferred on Gill eight awards, including its prestigious Home Depot Humanitarian Award and the 2011 Career Achievement

Award. Gill was inducted into the Country Music Hall of Fame in 2007. He is also a member of the Grand Ole Opry since 1991. In August 2012, Gill was honored with a star on the Hollywood Walk of Fame. Gill has produced albums for The Time Jumpers, Amy Grant and Ashley Monroe and has made guest appearances on more than 1000 albums, including those by Barbra Streisand, Eric Clapton, Willie Nelson, Dolly Parton, George Jones and others. In 2017, Gill was invited to perform with the Eagles for a number of festival shows and continues to join them onstage. For a full list of tour dates, news, images and

About Alex Hall
Originally from Gainesville, Georgia, country singer and guitar player Alex Hall is the epitome of what it means to be an artist. After picking up an acoustic guitar at the age of 14, he quickly set to work learning every Elvis Presley song on the King’s ELV1S: 30 No. 1 Hits album – his raw talent earning him his first singing gig at a local restaurant when he was still in middle school. While singing weeknights at the restaurant and preforming local shows, Alex captured the attention of a Nashville booking agent, which resulted in about 125 shows a year throughout high school…a feat for any artist, let alone someone still receiving a report card…and a valuable introduction into the country music community. After moving to Nashville and signing with Monument Records, he released his debut EP, Six Strings – a guitar centered project that featured Vince Gill, Brad Paisley, John Osborne, Brad Tursi, Tenille Townes and Kassi Ashton. Alex has opened for Tanya Tucker on her While I’m Living tour, Brandy Clark on her Who You Thought I

Was tour and has played dates with Little Big Town on their Nightfall tour. For additional information on music and shows, visit musicbyalexhall.com.